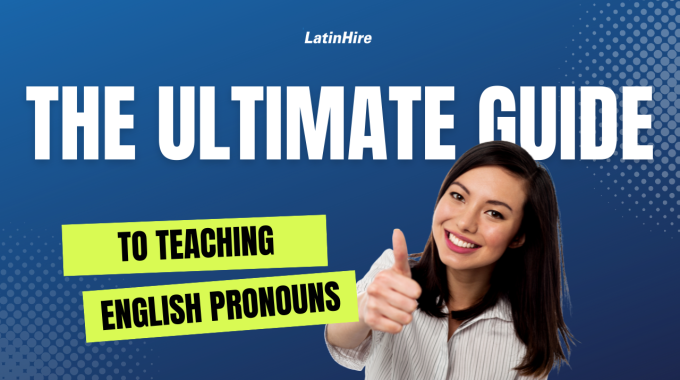 Pronouns take the place of nouns and we use them to avoid repeating the nouns that they refer to. English students often confuse how to use pronouns because there are many different types of pronouns in the English language and they look similar.

Here’s a guide to help you explain the differences between various English pronouns to your students!

A subject pronoun takes the place of a noun as the subject of the sentence. Recall that the subject of a sentence is the person or thing that performs the action of a verb.

I am going to the park.

He is planning to throw her a surprise party.

She always plays the part of the heroine.

It is old and needs to be fixed.

We often go on vacation twice a year.

They don’t know what they’re talking about.

Can you pass me the salt?

The principal wants to talk to you.

The waitress showed him to the table.

My mom is angry, I need to apologize to her.

He can’t seem to find it.

Please bring us to the waiting room.

Give these gifts to them when they arrive.

Did you find my notebook?

I saw your umbrella in the other room.

The police asked for his Identification.

She’s looking for her makeup bag.

My water bottle is missing its lid.

Where did you put our vacuum cleaner?

Their exam will be next week.

Possessive pronouns replace possessive nouns as either the subject or object of a sentence. Sometimes the noun being replaced does not appear in the sentence, so the context must be clear as to what person or thing the possessive pronoun is referring to.

That is not mine.

Yours is blue I remember.

I think his is the best.

That pen is not hers.

The car parked in that corner is ours.

Reflexive pronouns are used when the subject and the object of a sentence are referring to the same noun. They can be direct or indirect.

I patted myself on the back for doing a great job.

Did you hurt yourself from that fall?

He tricked himself into believing that she was in love with him.

She calmed herself down before her interview.

The dog scared itself when it looked in the mirror.

When can we treat ourselves to dinner?

My kids can take care of themselves when we’re gone.

We hope you found this guide to English pronouns useful for your English classes! Let us know in the comments below what other topics you’d like to see on LatinHire’s Weekly Article!

15 Halloween Idioms You Should Teach Your English Students

Halloween is just around the corner! It’s a major celebration on October 31st that many…

Never run out of conversation topics again in your ESL classroom! We have categorized an…