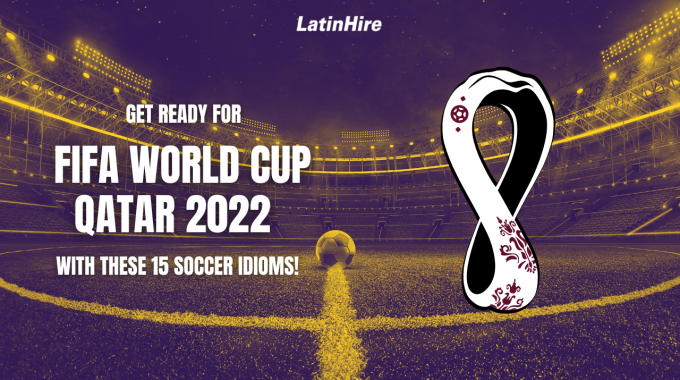 FIFA World Cup Qatar 2022 is starting next week on November 20th, bringing together 32 countries from around the world united by their love for soccer. If you have soccer fans (or not) in your class, here are 15 fun English idioms you can teach them about this beloved sport!

1) Get the ball rolling.

Meaning: To begin something.

Example: Let’s get the ball rolling, we don’t have much time.

2) Watch from the sidelines.

Meaning: To be a spectator, not participating in something directly.

Example: He’s a retired CEO so he’s just watching his company from the sidelines now.

Meaning: To have a quick reaction to and understanding of something.

Example: Working in customer service keeps me on the ball.

Meaning: To expose what someone has done to the public.

Example: He blew the whistle on his boss when he saw the financial statements.

Example: I’m taking sides with mom because I think she’s right on this one.

Meaning: A strategy made in advance.

Example: We need to get our profits up. What’s the game plan?

Meaning: To get back at someone for something they did wrong.

Example: He settled the score with his old colleagues after leaving the company.

Meaning: An event or idea that causes a significant change in the way things are going.

Example: The robot vacuum was a game changer!

Meaning: To start an event in a special way.

Example: Let’s kick off the New Years party with some dancing!

Meaning: To pay attention to something, concentrate on a goal.

Example: The annual review is coming up. Keep your eye on the ball!

Meaning: An unfair change of rules and conditions after they’ve been agreed upon.

Example: My boss keeps moving the goalpost, it’s not fair.

Meaning: At this point in time.

Example: At this stage in the game, it’s too late to turn back.

Meaning: To bully someone, treat them in an unfair or unkind way.

Example: You have to stop letting your classmates kick you around. Stand up for yourself!

Meaning: Too good for someone.

Example: I can’t ask her out, she’s way out of my league.

Meaning: Keeping record of something.

Example: You paid last time, let me treat you this time. // Oh no worries, I’m not keeping score.

Are there any other soccer idioms you know? Share them in the comments below! If you are a soccer fan, enjoy the FIFA World Cup Qatar 2022!

There are over 25,000 idiomatic expressions in the English language! Many idioms lose their significance…