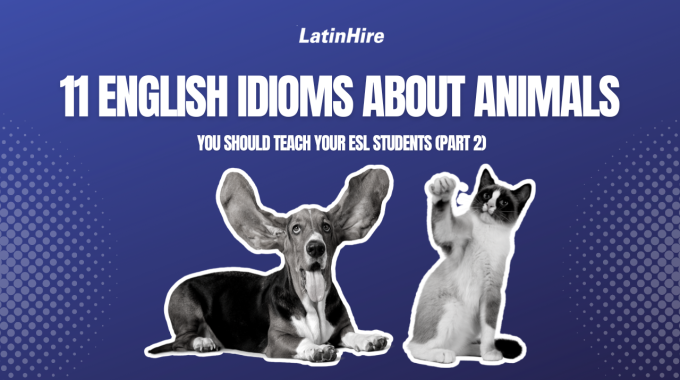 There are over 25,000 idiomatic expressions in the English language! Many idioms lose their significance when translated into other languages. No wonder English language learners get frustrated when they hear native speakers talking in idioms that don’t seem to make any sense.

As an English teacher, you can help prepare your students for these kinds of conversations by teaching them common idioms. If you missed our previous article 11 English Idioms About Animals You Should Teach Your ESL Students (Part 1), take a look at that first!

Here are 11 more English idioms about animals you should teach your ESL students!

Meaning: The biggest portion of something.

Example: He did the lion’s share of that project, but didn’t get the credit he deserved.

2) Kill two birds with one stone.

Meaning: To achieve two things with one action.

Example: I bike to work because it’s great exercise and I save money! Biking kills two birds with one stone.

Meaning: To reveal a secret without intending to.

Example: The party was supposed to be a surprise but Steve let the cat out of the bag!

Meaning: In an attempt to deal with an issue, you’ve created a situation that caused even more trouble.

Example: Asking about his ex-girlfriend opened up a can of worms.

Meaning: Something that someone finds annoying.

Example: My biggest pet peeve is when people chew with their mouth open.

Meaning: To eat a lot.

Example: There was so much food at the wedding, we all pigged out.

Meaning: A way of life in which people are caught up in a fierce competition of wealth and power.

Example: It’s so hard to get out of the rat race when all of your friends are buying better cars and bigger houses.

8) Take the bull by the horns.

Meaning: To deal with a difficult situation by confronting it directly.

Example: She decided to take the bulls by the horns when she moved out of her parents’ house.

Meaning: To watch something or someone very carefully.

Example: The mother was watching her kids like a hawk at the park to make sure they didn’t injure themselves.

Meaning: Someone who seems friendly and gentle but is really not a good person.

Example: Our new manager seemed like a sweet old man, but we soon discovered he was a wolf in sheep’s clothing.

Meaning: An old person is used to doing things in certain ways, so can’t or doesn’t want to learn new ways.

Example: My grandmother refuses to learn how to use a cellphone. You can’t teach an old dog new tricks.

We hope you enjoyed teaching these 11 idioms to your ESL students! What other animal idioms do you know? Share them in the comments below!

Get ready for FIFA World Cup Qatar 2022 with these 15 soccer idioms!

FIFA World Cup Qatar 2022 is starting next week on November 20th, bringing together 32…