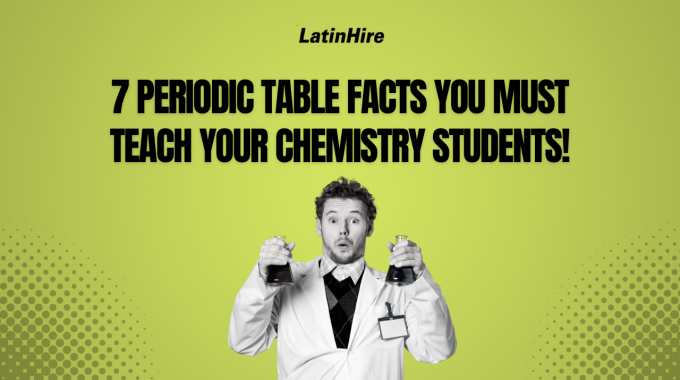 The periodic table is the most important table in scientific history. It serves as the foundation of our understanding of the material world and provides a useful roadmap for scientists and chemistry students around the globe.

Fact #1: Elements are organized according to physical and chemical properties.

By knowing the location of an element in the periodic table, you can predict its properties such as structure, mass, electron configuration, reactivity and many more. Elements in the same group (vertical column) have the same number of valence electrons, which are electrons in the outermost energy level while elements in the same period (horizontal column) have the same number of energy levels.

Fact #2: Dmitri Mendeleev correctly predicted the existence of elements that weren’t discovered yet during his time.

Although Dmitri Mendeleev wasn’t the first scientist to create a version of the periodic table, he is credited for organizing the elements into what most closely resembles the modern day periodic table. By arranging the elements according to their atomic mass, he was able to notice patterns of repeating properties and grouped those elements together.

When Mendeleev finished his version of the periodic table, there were many gaps for elements that were not yet discovered. By analyzing the patterns, he was able to correctly predict the properties of those missing elements. It baffled the scientific community when those elements were discovered years later with the exact properties that Mendeleev described!

Fact #3: The staircase on the right side of the periodic table splits the metals and nonmetals.

Fact #4: The modern periodic table is organized by increasing atomic number, which represents the number of protons.

For example, the first element on the periodic table is Hydrogen which has one proton and one electron. The second element is Helium, which has two protons and two electrons. Every following element has one extra proton and one extra electron than the previous element.

Fact #5: You can calculate the number of neutrons by subtracting the atomic number from the mass number.

An atom’s mass comes from adding its protons and neutrons (neutral charge), which conveniently have equal mass. The electron’s mass can be discounted because it’s only about 1/2000th the mass of a proton or neutron. Therefore, mass number = # of protons + # of neutrons.

Fact #6: The atomic mass shown on the periodic table is the weighted average of all of the element’s isotopes.

To calculate the average atomic mass:

Fact #7: Atomic size decreases across the periodic table even though atomic number increases.

The atomic size is the distance from the nucleus to the outermost electrons. You may think that atomic size would increase as atomic number increases because more protons and neutrons are added. However, from left to right of the periodic table, the atomic size actually decreases!

With a greater nuclear charge and same electron shielding, the attraction between the nucleus and the valence electrons becomes stronger, thus pulling them in and decreasing the size of the atom. (Going down the groups, atomic size increases as more energy levels are added.)

We hope you found these periodic table facts helpful for your chemistry class! What other facts about the periodic table do you teach your students? Share them in the comments below!