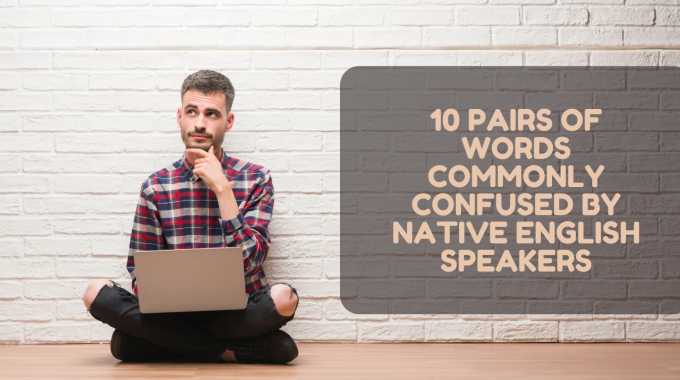 Native speakers of a language can also have doubts about their native language. Some words look very similar and others sound the same. Here are 10 pairs of words that are commonly confused by native English speakers, so if you come across these words in your English classes, make sure to clarify the difference to your students!

Affect: A verb meaning “to produce an effect on”.

Example: Sitting all day will negatively affect your health.

Effect: A noun meaning “the result of a change”.

Example: The effects of smoking are detrimental.

Anyway: An adverb meaning “in any case” or “nonetheless”.

Example: Anyway, I still went to that party.

Any way: An adjective meaning “in any manner”.

Example: You can do that in any way.

Complement: Something that completes something else.

Example: You two really complement each other.

Compliment: An expression of praise, admiration or respect.

Example: I complimented her on her beautiful dress.

4. Everyday vs. Every day

Every day: A phrase that means “daily”.

Example: He goes to the gym every day.

Lie: A verb meaning “to recline” or “rest in a horizontal position”.

Example: They lied on the bed with their dogs.

Lay: A verb meaning “to put or set something down”.

Example: She lays the plates on the table.

Lose: A verb meaning “to misplace” or “to fail to win”.

Example: He always loses his keys.

Loose: An adjective meaning “not tight”.

Example: Her shirt is very loose.

Passed: The past tense form of “pass”.

Example: She passed by the gas station on her way home.

Past: A noun that talks about times before the present.

Example: He had a very dark and horrible past.

That: Used in defining clauses (meaning the rest of the phrase is a necessary part of the sentence).

Example: Students that don’t study will do poorly on the exam.

Which: Used in non-defining clauses (meaning the phrase that follows is not an essential part of the sentence).

Example: His car, which has been recently bought, is located right over there.

Then: Used to indicate time.

Example: Then, we went to the cinema.

Than: Used to compare two things.

Example: His dog is bigger than my dog.

Who: A pronoun that is used as the subject of a sentence.

Example: Who is going to the game today?

Whom: A pronoun that is used as an indirect object.

Example: To whom did we assign this task?

Are there other words in English you commonly mix up? Share them in the comments below!

8 More Conversation Topics from I-P for an ESL Class!

Do you ever have trouble coming up with new conversation topics for your English classes?…

13 Sports Idioms You Should Teach Your English Students

English idioms and expressions are deeply integrated into everyday conversations, so it is vital that…