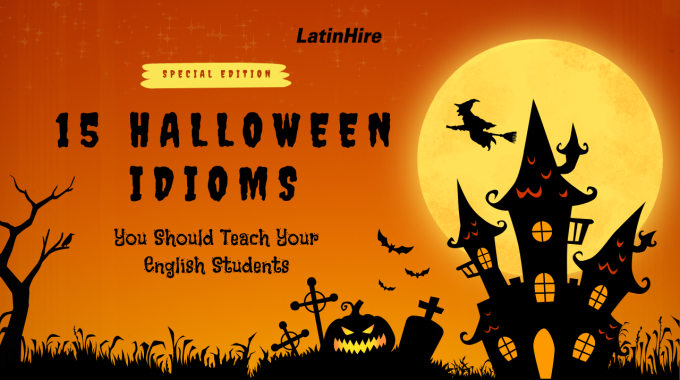 Halloween is just around the corner! It’s a major celebration on October 31st that many countries around the world partake in. Halloween traditions vary from dressing up in costumes to trick-or-treating to honoring the dead and many more. Did you know English has various idioms related to Halloween themes? Teach your English students these 15 Halloween idioms for some spooky fun!

Example: What does that say? I’m blind as a bat without my glasses.

Meaning: A decision that eventually causes problems to the person who made the decision.

Example: Forgetting to brush my teeth when I was younger was an error that came back to haunt me in old age.

Meaning: A person who presents the opposite side to stir up further discussion.

Example: I agree with you, but I’m going to play devil’s advocate so we can consider all the options.

Meaning: To do something that causes you harm.

Example: You dug your own grave when you made a joke about our manager in front of everyone.

Example: That girl is drop dead gorgeous. I want to ask her out on a date.

Meaning: A deserted town with few or no inhabitants.

Example: This city’s like a ghost town on the weekends.

Meaning: A shift that runs throughout the night, usually from midnight to 8am.

Example: I sleep all morning and afternoon because I work the graveyard shift.

Example: The injustice of that trial makes my blood boil.

Meaning: Someone who is usually awake and active at night.

Example: He is such a night owl, but I like to sleep by 11pm.

Meaning: Used to say you’ll do whatever it takes to prevent something from happening.

Example: You want to marry him? Over my dead body!

Example: I was scared stiff when I saw a shadow come up from behind me.

Meaning: Someone who is easily scared.

Example: Don’t be such a scaredy cat. That’s just a Halloween decoration.

Meaning: Keeping a shameful secret that could ruin a person’s reputation.

Example: Most couples have a skeleton in the closet.

Meaning: To suspect a trick or deception.

Example: Something’s not right. I smell a rat.

Meaning: Midnight; the time that witches are believed to be most powerful.

(Stay tuned for next week’s newsletter about how Halloween is celebrated in different parts of the world!)

5 Skills Great Teachers Must Have (Part 2)

Never run out of conversation topics again in your ESL classroom! We have categorized an…