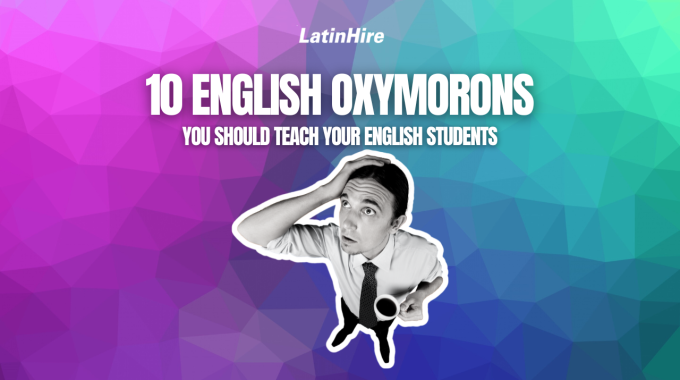 An oxymoron is a figure of speech that combines two words of opposite meanings to create a new word or phrase with a unique meaning. Oxymorons can seem absurd, yet make perfect sense at the same time. They often present a sense of humor, irony or sarcasm and are used to create emphasis and drama. ESL students are often confused when they see oxymorons because it seems strange that two words of complete opposite meanings can be put together.

So here are 10 commonly used English oxymorons you should teach your ESL students to prepare them for the English world!

Example: That burrito was awfully good!

Meaning: Something pleasant but with some elements of suffering.

Example: The goodbye party was bittersweet as we said our farewells before beginning our new adventure.

Meaning: Going through the motions of life but not really living or looking in bad shape.

Example: You look like the living dead! When was the last time you had a good night of sleep?

Meaning: To say that two things are not really different in any significant way.

Meaning: A strong absence of noise that it’s bothersome or the failure to say something in reaction.

Example: There was a deafening silence after I broke up with her.

Meaning: A supposed secret that is actually known to many people.

Example: Their affair was an open secret in the office.

Meaning: Something that is no longer of interest or relevance.

Example: That band is old news.

Meaning: There is only one option.

Example: That job was my only choice. I didn’t hear back from any other companies.

Meaning: Completely not understanding something or someone.

Example: They clearly misunderstood the assignment!

Meaning: Something you think you may do, but are not completely sure.

Example: “Are you coming to the party?” “It’s a definite maybe.”

Have you taught any other English oxymorons to your ESL students? Share them in the comments below!

40 Fun Ice Breaker Questions to Get Your Students Talking

Great conversations stem from great questions. If you find your group classes a little awkward…

Christmas is one of the most rejoiced holidays around the world. Its origins are rooted…