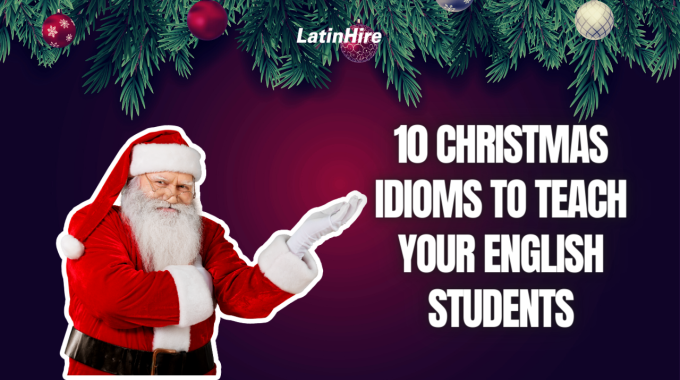 Christmas is one of the most rejoiced holidays around the world. Its origins are rooted in the commemoration of Jesus Christ’s birth, but now it’s celebrated by both religious and secular people alike. Christmas season is a great time of the year to bring family and friends together to celebrate life.

In a week, Christmas will be here so get into the holiday spirit with these 10 Christmas idioms! This holiday is often associated with snow and winter, so some of these idioms are based on the winter season.

Meaning: Experiencing some good fortune or happy surprise before the holiday seasons.

Example: My boss just agreed to give me a raise. Looks like Christmas came early this year!

Meaning: The size of something doesn’t determine the value of it.

Example: His marriage proposal made me light up like a Christmas tree.

Meaning: To leave someone in a bad position or to forget someone.

Example: They planned that party without me. I was left out in the cold.

5. Christmas comes but once a year.

Meaning: Christmas should be a time of enthusiastic celebration, whether through a spirit of generosity or indulgence.

Example: I’m buying a lot of toys to donate this Christmas season for the less fortunate. Christmas comes but once a year.

Example: Why the frown? Where’s your holiday spirit?

Meaning: Doing something that is dangerous and involves a lot of risk.

Example: She was skating on thin ice when she called out her boss in front of everyone.

8. Giving [someone] the cold shoulder.

Meaning: Purposely ignoring someone or treating them in an unfriendly way.

Example: He gave me the cold shoulder after I forgot to include him on the list.

Meaning: A situation in which something increases in size or importance at a faster and faster rate.

Example: The more successful you are, the more publicity you get, which leads to more success. It’s a snowball effect.

Meaning: A Christmas day that is covered with snow.

Example: There was a huge snowstorm last night, looks like it’ll be a white Christmas this year!

How will you be celebrating the Christmas holidays this year? Let us know in the comments below!

Writing an email is an essential skill in communication, especially in professional settings. Teaching your…

10 “False Friends”​ between Spanish and Portuguese

Spanish (ES) and Portuguese (PT) are the two most widely spoken languages around Latin America.…

Get ready for FIFA World Cup Qatar 2022 with these 15 soccer idioms!

FIFA World Cup Qatar 2022 is starting next week on November 20th, bringing together 32…