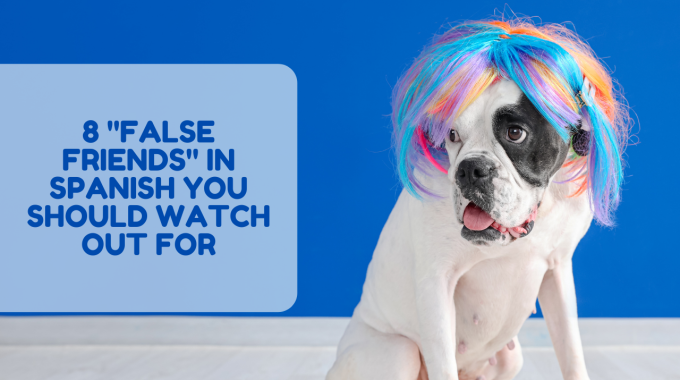 Taking a new language from the books to the streets can be nerve-wracking. As you strike up your first conversations, there’s a constant worry about saying the wrong things while trying to piece together your limited vocabulary with the correct grammatical structure.

Language learning is not easy. However, it is so worth the struggle as it opens up your world to new opportunities and friendships. You’ll certainly come across many moments of embarrassment, but it’s alright. A big part of the experience is making mistakes and laughing about them in hindsight.

If you’re learning Spanish, there are many “false friends” to be aware of. These “false friends” – also known as “false cognates” – are words that sound and look similar in Spanish and English but have very different meanings.

To help you avoid some embarrassing moments, here are 8 “false friends” in Spanish you should be aware of:

What you may think it means: Embarrassed

What it actually means: Pregnant

The language learning journey is filled with embarrassments. However, when you want to express your embarrassment, please don’t say “Estoy embarazada”, unless of course you’re actually pregnant and want to use that opportunity to announce the good news.

If you want to say you’re embarrassed, say instead “Estoy avergonzado/a”.

What you may think it means: To introduce

What it actually means: To insert

If you want to introduce a friend to another, do not say “Te quiero introducir a mi amiga.” It sounds vulgar and can be taken the wrong way. In Spanish, we use “presentar” to introduce ourselves or others.

In the situation of introducing your friend, say instead “Te quiero presentar a mi amiga”.

What you may think it means: Delight

What it actually means: Crime

Say your boss wants to honor your hard work and gives you a promotion to which you respond, “Es un delito recibir esta promoción!” Your delight may soon turn into dismay when you realize you just said, “It’s a crime to receive this promotion!”

What you should actually have said is, “Es un placer recibir esta promoción!”

What you may think it means: To support

What it actually means: To put up with

You want to express your lifelong support to your friend, so you say “Te voy a soportar toda mi vida!” What you actually just said is “I’ll put up with you for all of my life!”. Your friend may take that the wrong way and think maybe the friendship isn’t meant to be.

What you should say instead to show your support is, “Te voy a apoyar toda mi vida!”

What you may think it means: Constipated

What it actually means: To have a cold

When someone in Spain has a cold, they may say, “Estoy constipado/a”. Too much information? Well, you must have had a cold at some point in your life also! In the rest of the Latino countries, people will say “Estoy resfriado/a” instead, but if you’re traveling in Spain and hear the word “constipado”, chances are the person is not sharing about their bowel movements with you.

If you want to say you’re constipated for whatever reason, you can say, “Estoy estreñido/a”.

What you may think it means: Excited

What it actually means: “To be turned on (sexually)”

Say you’re going to meet your friend’s mom for the first time and you want to express your excitement. Do not say “Estoy excitado de conocer a tu mamá!” unless you want to lose a friendship by telling your friend you’re turned on at the thought of meeting his mom.

What you may think it means: To molest

What it actually means: To annoy

To say that someone is being molested in Spanish, we say “abusar sexualmente”.

What you may think it means: Preservative

What it actually means: Condom

If you’re a bit of a health freak and like to ask restaurants if their food contains preservatives, do not say “Esto tiene preservativos?”, because you just asked if there are condoms in the food!

In Spanish, preservatives is “conservantes”, so be sure to know the difference between these words!

If you’re interested in learning Spanish for free, click here to check out a previous article by LatinHire.

There are over 25,000 idiomatic expressions in the English language! Many idioms lose their significance…